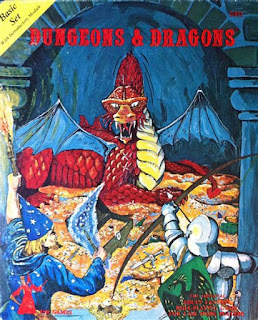 This is the second post in a two-part series of posts on the title of Dungeons & Dragons as a means to empower hobbyists to start their own medieval fantasy wargames campaigns.

The last post was on level of scale and the incorporation of role play. This post is on how the one-to-one level of scale empowered character exploration -- giving birth to the supertitle, "Dungeons & Dragons."

Before the publication of Dungeons & Dragons, its co-author, Dave Arneson, was already a wargamer involved with his group of friends in running wargames campaigns. He and came up with a wargames campaign for his friends that was a full-blown medieval fantasy wargames campaign that came to be called Blackmoor. Arneson had already encouraged his players to look at their relationship to the wargame in a different way. Inspired by things like Diplomacy, and by Baunstein and other such campaigns before, Arneson encouraged wargames-style role-playing as a significant aspect of the birth of Dungeons and Dragons.

Dave Arneson stumbled upon a scenario over the course of his Blackmoor campaign where his players’ characters, while laying siege to the castle of one of their enemies, decided that they would mine, that is to say, dig under the walls to try to break the siege. When Arneson moved the scale down to the level of skirmish so that each figure on the table was one to one in scale, then you have not just a soldier in front of you, but you have what is going to be called a character, and you're going to be playing not as the general of an army, but as that one character in a medieval fantasy setting.

This gave Dave Arneson an idea. And what he decided to do has made history. He set up a situation where once the players’ characters had successfully dug under the walls of the castle, they would suddenly find themselves tunneled right into the crazy labyrinthine dungeons underneath the tyrannical lord's castle.

Instead of just coming up in the castle yard, they found themselves down in the dungeons. And instead of the normal dungeons of history that just had normal prisoners, Dave Arneson populated this dungeon with the fantasy denizens of the underworld: monsters and creatures that the characters had to steer clear from so that they could come up, find the bad guy, take him out, and win the day.

Arneson conducted this scenario such that the players’ characters did not know exactly where they were until they had explored the dungeon and created their own map of the dungeon. They could keep track of where they'd been, where monsters were to avoid. They were playing in such a way that they were not simply laying out a battlefield and playing a pitched battle with miniature figures on a one to one scale, but instead they were imagining exploring down in the darkness of a deep dungeon and they had to create a map of what they'd discovered as they were going along.

This is not unlike other games that were popular at the time and still are, such as Battleship and Stratego. Both Battleship and Stratego are simple games where something is concealed from the player, and through play you slowly begin to reveal what's concealed, and those revelations and guesses made on those revelations help lead the player to victory. So this was already a concept that existed in gaming, and Arneson was able to grab it and use it at a much more complex level of scale where instead of it simply discovering whether you've sunk someone's battleship, or whether you've found someone's flag in a battlefield, now you got a whole labyrinthine dungeon underneath an evil tyrannical castle.

Dave Arneson's players found this so exciting and fun that they said, "Hey, we've really got to do this again sometime." We now see the birth of the first dungeon for what would come to be called Dungeons and Dragons.

Everything in place for the Title: Dungeons & Dragons

Arneson had stumbled upon the joys of dungeon exploration with his players. Dragons are the quintessential monster of medieval fantasy. At the time in the wargaming hobby community, there were a lot of “something & something” titles. Fill-in-the-blank and fill-in-the-blank titles were popular at this time of hobby wargaming. So there is a story that says that Gygax as sitting at his kitchen table with his daughter and a list of words. He would go through the list, adding two words together with an “and” in between. When the combo “Dungeons & Dragons” finally came up, his daughter said, “that’s it, that is the one.” And it has stuck ever since. At least that is the story!

So now with this post in this series, and with the posts of the previous series on the subtitle, we have in place what a wargame is. We have in place the tradition of Free Kriegspiel. We have in place what a wargames campaign is. We've talked about how things move down to the skirmish level or one to one scale of play. We've talked about role playing in early war gaming, such as the game of Diplomacy. We've talked about how Arneson added the discovery of hidden things through careful play, such as we find in games like Battleship and Stratego. When all of these things come together, then Dave Arneson together with Gary Gygax were able to put together the first published rules for setting up and conducting a medieval fantasy wargames campaign: Dungeons and Dragons.

So to sum things up, Dungeons & Dragons arises when we have a referee (Free Kriegsspiel) with an extensive knowledge of both wargaming (hobby) and medieval fantasy literature (fidelity to outside source) who moderates a generally skirmish scale (level of scale) medieval fantasy wargames (wargaming) campaign (campaign-play) that connects wargame sessions involving exploration of unknown spaces and areas (exploration) through skillful role-play (role-play). I would add, anyone playing a game with these elements in place, because they are playing a fantastic medieval wargames campaign, they are therefore playing "Dungeons & Dragons," as originally presented by the authors, whatever that particular group happen to call it, and whatever is currently being published with that name printed on the cover!

These two series of posts are now tied up. Now I can launch a follow-up series of posts where I will look at a couple of miscellaneous things that haven't quite fit into a previous post but that now begin to make sense in light of what we have discussed so far: things like Experience Points and gold, etc.