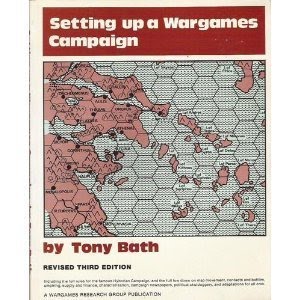 This is my third post in a series of posts where I look at the subtitle of Dungeons & Dragons as a way to allow the rules to provide a launch point for one's own wargames campaigning.
The last post was on Medieval Fantasy and Dungeons & Dragons. This post will be on what "Rules" mean in the context of the original publication.

One significant tradition within wargaming goes back to the use of wargaming as actual training for young officers in 18th and 19th century Europe. This tradition was called, "Kriegsspiel," which is German for wargame.

One particular branch of Kriegsspiel that developed early-on and that influenced all subsequent hobby wargaming, was called, "Free Kriegsspiel." Free Kriegsspiel recognized that the circumstances of war cannot be covered exhaustively by written rules because reality is complicated, difficult to know, and the human mind is finite. You can't possibly map every thing that would go into a possible battle into a perfect rule-set. So in Free Kriegsspiel you would get somebody who had been in so many actual, real world battles, that they knew what combat was like and what warfare was like, such as some old officer who had seen many battles.

Then you would get these young officers in a room, and you'd have a map, and you'd have pieces of the map to represent different forces. And then they would divide up into two different sides and the two different sides would issue their orders to their soldiers, and then this seasoned officer, that was acting as a referee, would judge who he thought would be the successful party in this particular battle based on his actual lived experiential knowledge of how warfare worked. So in the Free Kriegsspiel tradition you trusted a veteraned officer to make a judgment call as to whether your orders were good. And then that old seasoned officer could coach you and say, "in future don't make that decision because you'd be flanked, or you'd be outnumbered, or you'd be outrun. Etc.”

In this way, Free Kriegsspiel provided excellent training and mentorship for future officers. This in turn influenced the wargaming hobby where, even though you might have some rules, such as dice mechanics, to give the feel of randomness and probability, nonetheless, in some cases, you would want to have a referee. The referee would be somebody who was so familiar with war that he could make judgment calls based upon described actions. The referee might roll the dice if he or she felt like he or she needed more information than just orders.

The person that you'd appoint to be the referee over your game would be somebody who had real expertise in the history of war, into historical wargaming, and had accounts of so many battles and so many different types of warfare that you trusted his or her judgment call in a game. The role of referee in wargaming depends upon real knowledge of warfare.

One obvious example of where you would need a referee in wargaming would be when you have too many for the players alone to manage all the information and play well at the same time. Or, trying to agree to the meaning of certain actions and rules may take so long to judge that play gets bogged down, and something that is supposed to be entertaining is turned into a bore. Or, you might need to have a situation where certain information is secret to other players to simulate the unknowns of war, such as espionage or scouting. So there's practical gaming reasons why you'd want to have a referee. The tradition of referees in Free Kriegsspiel gives the advantage of less rules to know and interpret together with a faster-paced game.

The tradition of Free Kriegspiel referees lives on in Dungeons & Dragons. Later publications by the same name would introduce the term "Dungeon Master." But the original Little Brown Books knew no such phrase. The person to facilitate the session was a referee, just as in Free Kriegspiel. And just as in Free Kriegspiel, that person was expected to be expert in all the relevant areas of knowledge necessary to make the game "realistic," or, in the case of fantasy, as true to the sources, the literature of Sword and Sorcery. In the case of the wargame hobby, this "expertise," is amateur, not professional in nature. This goes back to the original sense of the word "amateur," as someone who just does it for the love of it. There are many cases where an amateur can know more than, or have much more facility with a topic than a so called professional. And that is the kind of expertise we are looking for in this hobby.

The "rules" of Dungeons & Dragons follow this tradition of Free Kriegsspiel. Playing Dungeons & Dragons requires a referee. The booklets themselves encourage referees and groups to interpret the rules in different directions. Referees are encouraged to build their own rules. The building of local, hobby wargaming group includes the assumption that each hobby group, just as with the wargaming hobby in general, will wind up having its own peculiar, local rule set that works for them and that reflects the campaign they have developed on their own.

In his Quick Primer for Old School Gaming, Matt Finch has coined the phrase, "Rulings, not rules," in order to try to catch, in a single pithy, easily memorable phrase, the pith of this approach. The point is that the referee is trusted to make good calls for each unique situation that arises, due to his or her expertise in medieval warfare, medieval fantasy literature, dice probabilities, traditional wargame mechanics, and the like. Over time, these rulings would become a unique set of rules for each wargame club.

For contemporary ears to hear the subtitle of this game correctly, then, it should almost be changed to "Guidines," or "Ideas," or "Suggestions," "a Framework," or "Examples," "for Medieval Fantasy Wargames Campaigns."

Next in the series: "Campaigns"

Posted by Tetramorph at 8:07 AM