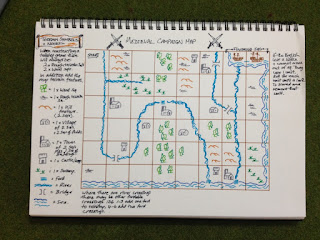 This is the fourth post in a series of post where I explore the subtitle of Dungeons & Dragons as a means of empowering hobbyists to start their own Medieval Fantasy wargames campaigns.
The previous post was on "Rules," this post is on "Campaigns," or, wargames campaigns.

Napoleon didn't just fight one battle. The Napoleonic wars were not won by one battle. In actual warfare, often, many battles are pitched as part of an overarching war to attain victory. And not until many battles are fought does a victor emerge. A general, or a king, goes on a war campaign. And this campaign consists of a series of battles that are strategically designed and carefully operated in order to gain victory.

This series of connected battles, towards the end of winning the war, is called a campaign or a war campaign. Likewise, wargamers who are interested in playing out historical wars also become interested not just in playing-out one given battle but in putting a series of related, connected battles together where the outcome of one battle affects the setup of the next battle. They're going to string these battles into a campaign. And this is what is called a wargames campaign.

The key feature of a wargames campaign is that more than one battle is set up and run as a game. But these separate games are connected to each other and the conclusion of one wargame has an affect on the setup of the next wargame much like how, in a real war, multiple battles are pitched before victory is clear.

Wargames campaigns can be done at very high levels of abstraction or at a very detailed level depending on the interest, time and energy of the wargaming group. But wargames campaigns require a different set of rules than those needed to resolve battles with miniatures on a table. You need one set of rules for how to determine the outcome of one given battle on a table of miniatures. But in order to connect the outcome of that battle with the next battle you need an overarching set of rules that logically and coherently connects disparate battles together. You need a set of campaign rules.

There are many different ways to set up a campaign but I'm going to explain one particular kind called a "map campaign." Map campaigns are one of the first and earliest forms of wargames campaigns. In this kind of campaign you take your wargaming table and let's say that it is four feet wide and eight feet long. And you use it on, say, a scale of one inch for 10 or even 100 yards. Then you get out a very large sheet of paper, and a ruler, and you divide along the top every four inches. Then you divide along the side, every eight inches. So you’ve divided this very large piece of paper into separate rectangles, four inches by eight inches. Then each four by eight-inch rectangle represents one battle ground on which you could set up a wargame.

Now you take this sheet of paper, that has been divided into four by eight rectangles and you either overlap that on top of an actual historical map, to scale, or you invent your own situation and imagine an area and some terrain.

You might start one army in one town, and the other army in another town, and then the referee would ask the players for their orders. The players give very detailed written orders to the referee. This is a complex situation where ideally a given player is unaware of the other players’ orders until executed. This is a case where it not only helps but might possibly be necessary to have a referee. The referee reads the orders and determines for example, whether any two armies have sighted each other.

If two opposing forces have met, then you set up your game table for a miniature wargames battle and resolve the conflict using the rules for a wargame that your group had already been using. Upon the conclusion of the conflict you note the outcome of the battle and decide what that means going forward as the campaign continues. This map, then, becomes the means for piecing together all of these different possible battles that could be pitched on your gaming table.

Dungeons & Dragons as a Map Campaign

In Dungeons & Dragons, in the third Little Brown Book, “The Underworld and Wilderness Adventures,” Gary Gygax and Dave Arneson suggest that you need a map of the immediate terrain surrounding the entrance to the underworld. That map of the overall area would have suggested to fellow wargamers something like a map campaign.

Keeping this in mind helps us to remember what the subtitle meant when it said that these were rules for a wargames campaign. The word "campaign," has taken on new connotations in the on-going growth of Role Playing Games (RPGs). But the original sense of the word was that of logically connecting wargame battles into a single campaign. The rules for the resolution of combat were one game. The rules for connecting the wargames together and including things like supply chain, economics, population, recruitment, leadership, political powers, espionage, diplomacy, and the like, were a different game or even set of games. Remembering this clears up some confusion for folks that come to the original rules only familiar with RPGs that see themselves as a single unified rule-set.

The rules for resolving an individual battle are different from the rules that connect particular battles to one another in a coherent campaign. If your group were conducting a wargames campaign, just as your group over time may have developed its own rules for resolving individual battles, so too over time your club might have developed rules for a campaign so clear and coherent and so seemingly realistic to the historical period you were trying to game, that you might think, "Hey, this is shareable too."

So sometimes wargamers would publish not just rules for resolving battles but they would also publish rules for how to set up a war games campaign. One of the most famous of these is by Donald Featherstone. Another good example is C. S. Grant’s Wargames Campaigns. One really famous set of rules for wargames campaigns relevant to the topic of Dungeons and Dragons is Tony Bath’s, "Setting Up Wargames Campaign." Tony Bath deliberately chose a fantastical medieval wargames setting for his campaigns for the simple reason of not having to worry about getting the history perfectly correct. Wargamers were used to these two aspects of their hobby, battle resolution and campaign organization, being published separately from one another.

Rules complete as rules for campaigning

This is what Gygax and Arneson were doing when they first published Dungeons & Dragons. They were not publishing a comprehensive rule-set that included both campaign rules and combat resolution rules. They were publishing what it would take to coordinate other rules together into a campaign.

The booklets themselves often refer the reader to other rules, like Chainmail, or the boardgame Outdoor Survival. Gary Gygax and Dave Arneson understood that any rule-set for resolving medieval warfare would do the trick. What Gygax and Arneson were offering were not so much the rules for running individual wargames battles, although some outlines of how to do so were suggested. They assumed that your local group had rule-sets available for resolving given wargames, so, instead, they were offering rules for how to string together a series of wargames into a campaign. The rules are not incomplete for a wargames hobbyist. They give everything needed to start one's own medieval fantasy wargames campaign as an amateur hobbyist.

We now have everything in place to make sense of the subtitle: "Rules for Fantastic Medieval Wargames Campaigns." I hope I have shown how helpful understanding the subtitle is to understanding what Gygax and Arneson were up to, and towards understanding what the original publication called "Dungeons & Dragons" has to offer -- and what it does not. I my posts inspire some readers to use the guidelines suggested in Dungeons & Dragons to launch their own, unique, medieval fantasy wargames campaign.

Now that I have concluder this reflection on the subtitle, I am set for a two  part series on how we have come by the supertitle itself: Why "Dungeons & Dragons"? Once we have this in place even more will start to make senes about the original published rules for medieval fantasy wargames campaigns.