This is my first post in what will become a series of posts that I hope will be helpful for folks trying to understand Dungeons & Dragons as a hobby and especially the original published rules that empowered hobbyists to launch their own campaigns.
Introduction to the series
The subtitle of a published work is always the real title. Studying a subtitle, when provided, will often tell you more about what the author understands the work to be about than the main title.
The original subtitle for the first published edition of Dungeons & Dragons is:
Rules for Fantastic Medieval Wargames Campaigns.
The real title, therefore, is "Rules for Fantastic Medieval Wargames Campaigns." A lot of the misunderstandings or confusions about Dungeons and Dragons* comes from not understanding what the publication really is. In order to understand what the first "little brown books," or, LLBS were really offering, one needs to know what a wargame is, and, better, have some contact our hours of actual play. One needs to know what a wargames campaign is, which means one needs to understand war enough to understand that it is a campaign comprising a series of battles, not one battle. One needs to understand what was considered "fantastic medieval" at the time of its publication. Finally, one needs to understand how hobby wargammers understood "rules" to work and what they meant and how they used them.
Once these things fall into place, Dungeons and Dragons suddenly starts to make a lot more sense and to become much more accessible as the launch point for one's own hobby. So let's start with the central word of the true title, the word that all the others build-off of or modify, the word "wargames." 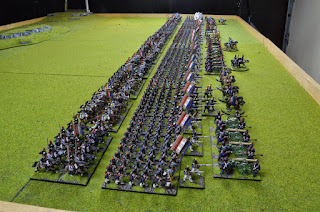 At the time that Dungeons & Dragons first appeared, the hobby called wargaming had gained fair popularity. The hobby consisted of casting or collecting miniature figures of soldiers of different military eras, painting miniatures, preparing large tables with scenery and terrain, etc. You would then conduct a wargame where you would, perhaps, relive an historical battle or maybe even perform a hypothetical battle, a battle that could have taken place but that actually did not.

So what is a wargame? Well, it is first of all, a game. Like most games, you have players, you have goals and victory conditions, you have pieces, you have a setup, and you have rules to the game. Wargaming is about war. So it's a game that's particularly focused on trying to play-out, to varying degrees, combat or warfare of an historical period.

Now, in some historical wargaming, what you're really trying to do is set up all the conditions of an historical battle that actually happened and that you knew existed. Then a group might decide, "Well, what if other battles were fought that were never recorded in history? Or what if we just made up a battle that would be fun to pitch and see what that was like? We're going to use the same soldiers, the same groupings of soldiers and the same statistics matched to dice rolling. We'll play out what would happen in this hypothetical situation."

For example, one particular historical period that a lot of wargamers like to focus on, among many, is the Napoleonic era of warfare. There's something very attractive about Napoleonic warfare for various reasons. One is that the troop structure was quite organized. It was one of the first set of wars where lots of records still exist that were kept meticulously and mathematically. Someone can do mathematical analysis on Napoleonic battles and learn the probabilities of one army defeating another army.

This meticulous information is really fantastic for wargamers, because what wargamers figured out pretty early on in the hobby was that the chances and vagaries of warfare could roughly be emulated by rolling dice. A single die will turn up random chances. But when you start rolling combinations of dice they roll up in probability curves. If you can find a probability curve in a combat situation, you can find a matching way of rolling dice to simulate that probability. So with all of the data that existed from Napoleonic warfare, wargames hobbyists can, fairly well, emulate the outcomes of an actual battle.

What we have discussed so far can already help us to understand some of the terminology and approaches of Dungeons & Dragons.

Having some understanding of Dungeons & Dragons wargaming context helps make sense of some of the presentation of the rules that might otherwise seem confusing. For example, I used to wonder why there was an alignment table in Men and Magic separate from the monster table and stats in Monsters and Treasure. If you're playing Napoleonic wargame, you need to know which side of the table to place Napoleon and which side to place Wellington and then set-up those armies. If you're doing a map campaign, you need to know where is France and the central cities that grant resources to the French army and where is England and where are the central cities that grant resources to the English army and navy.

You need to know the sides of your battle and that's exactly what's going on in the Chainmail fantasy supplement with its “General Line-up.” This gets reiterated in Dungeons and Dragons’ Men and Magic. You have the alignment table to give you sides. The big battle is between law and chaos. Some creatures are on the law side and some creatures are on the chaos side and some can go either way. Then there are some creatures that just opt out of it altogether, like Switzerland. If you're setting up a wargame table, one side is chaos and one side is law, in this medieval fantasy war game context. So right up front, in the first book, you've got a list of the sides and who might not take a side.

Dungeons & Dragons has fairly strictly defined classes for characters because Gygax and Arneson applied this notion of classes of troop-types from their hobby of historical war gaming.

Let's look at Napoleonic warfare again. You're going to have classes of troops, types of troops, so in the classical Napoleonic context you are going to have infantry, cavalry and artillery. If you want to make it even more complex level of detail in order to try to snatch a little added realism, then you're also going to have dragoons, light infantry, heavy infantry, light cavalry, and heavy cavalry, heavy artillery, and light artillery for a greater level of scale of detail. But each of these types of troops are different classes. You know exactly what artillery can and can't do, you know exactly what infantry can and can't do, you know exactly what cavalry can and can't do. You know what their attacks are like, you know what their defenses are like, and you know what their movement rates and capacities are like. This enables you to develop your strategy by having clearly defined classes on your battle table.

Gygax and Arneson were used to this approach to things. They developed the fighting-man, the magic-user, and eventually the cleric. And these became character classes. As in Napoleonic game you would have artillery, cavalry and infantry where each of those classes of troops have clearly defined the capacities of movement, attack, and defense, so too then the fighting-man, the magic-user, and the cleric have different capacities, abilities and liabilities that define the way that they will be played and will influence the way in which they can come together as an adventuring party to be successful together.

Wargaming didn't have to just be Napoleonic, for hobbyists interested in war history. So wargamers would also try to set up situations where they could emulate, historical or hypothetical, increasingly more modern warfare like World War I or World War II era warfare. Eventually, wargamers would get interested in ancient and medieval warfare. And from there, to "fantastic medieval" warfare!

Next in the series: "Fantastic Medieval"
Fight on!
*A note about "Dungeons & Dragons": There have been many products professionally published bearing the name “Dungeons and Dragons.” At the time of the release of this post, we have what Wizards of the  Coast call the Fifth Edition. In this blog series, I will not refer to an edition number when I say, “Dungeons & Dragons.” Rather, when I say, “Dungeons & Dragons,” I will be talking about Gary Gygax and Dave Arneson’s rules for how to put together medieval fantasy wargames campaigns that were first published in 1974 by TSR. This is what some people call the original rules. Sometimes these rules are referred to as, “Original Edition Dungeons & Dragons,” "Original Dungeons & Dragons," or, "OD&D." Sometimes people will abbreviate it as, "Oe", meaning, "Original Edition." Or even "Zero-e," meaning, "Zero Edition."
Bibliographical Note: Much of this post and any posts I share about the history and historical context of D&D is based upon the book Playing at the World by Jon Peterson.
Posted by Tetramorph at 7:31 AM