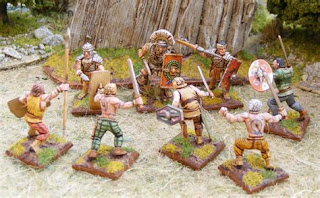 I recently published a four post series reflecting on the subtitle of Dungeons & Dragons to help make sense of the original publication. Here are those links:

With those reflections in place, I can now move on to reflect on the development of the supertitle itself: "Dungeons & Dragons"! In doing so I hope to empower hobbyists to start their own medieval fantasy wargames campaigns.

This will be the first post in a short two-part series of posts. This post will be on level of scale and how the move to one-to-one scale empowered things such as the abstraction of hit-points and the ability to role-play.

Wargaming allows for play at different levels of scale. So on a given war gaming table, an inch might represent 10 feet, 10 yards, 100 yards, etc. One miniature soldier might represent as many as, say, 10 soldiers, 20 soldiers, 100 soldiers, depending on the level of scale that you'd set up in the beginning. For most historical miniature wargaming, the level of scale is what is called tactical. So tactical warfare is one given battle between two armies where two generals or colonels can direct the activity fairly obviously over the course of about one battle day.

This makes a lot of sense in, say, Napoleonic warfare, which is again, one of the reasons why Napoleonic warfare is so attractive to historical wargamers. But there are other levels of scale. If you jump up to a higher level of scale, you can have strategic wargaming. This is where you might start getting into what you call hex and counter wargaming, where you've got a map divided into many different hexagons, and those hexes might represent 5 miles, 6 miles, 25 miles of distance across. Instead of miniatures representing soldiers, or 10 soldiers, or 100 soldiers, you have a more abstract piece that represents an entire legion, battalion, or perhaps even an entire army.

At the highest level of abstraction you have board games like Axis and Allies, or Risk. Some miniature wargamers question whether those should count as wargames, because they're at such a high level of abstraction that they're not very far away from a game like chess or checkers. But the typical scale of war gaming for miniature wargamers is tactical. You can abstract it to a higher level like strategic. But you can also move down to a tighter level of scale.

You can go down to a level of scale called skirmish warfare. This is where you're really talking about individual soldiers, head to head with each other. In this case, each one of your miniature figures actually represents one soldier. So the ratio or the scale becomes one to one. Every miniature figure is exactly one soldier.

Chainmail, for example, has a section dedicated to skirmish or man to man combat for the resolution of this level of medieval wargaming. So its fantasy supplement had to address this level of scale as well: how would fantastical creatures and armies match up in not just tactical, but also skirmish level warfare.

One-to-one level of scale helps make sense of the roots of some of Dungeons & Dragons core mechanics, such as, for example, Hit Points. The rules of combat resolution have to be different at such a tight level of scale. The statistics, the way that you match results of combat up to dice, the things that a referee would need to judge all change when you get to that smaller, tighter level of scale.

In a tactical level wargame, when two enemy troops come in contact with each other, generally, if one side is successful and the other fails, the side that fails is removed. If you have those rules exactly at a skirmish level, playing only one character, then every time you went into combat, your character might die the first time he or she was hit. This hit-equals-removal way of playing that works at a tactical level doesn’t directly map to a skirmish, one-character-per-player level of scale. So instead Gygax and Arneson developed hit points. Hit points are the number of points your character can take from successful hits before the character is finally removed. Hit points are an abstraction for the relative resilience of your character and so, in general, as your character increases in level, your character is going to increase in this resilience, represented by hit points.

One-to-one level of scale also helps us make sense of what the original players understood "role play" to be. Role-play existed before Dungeons and Dragons. Role playing is something that's done for example, at professional development training sessions, in training for therapists and counselors, or in other contexts where a mentor is trying to teach a student. A concrete situation with a client, or a patient, or even a more dangerous scenario, where you would say, "here is the situation. We're going to pretend that this situation is real, and we want you to role play what you think you would do in this situation."

One of the chief examples of role-play in wargaming would be the famous game, Diplomacy. Diplomacy is a wargame at the highest possible level of abstraction that could still really count as a wargame. You have a map of Europe, right on the edge of World War I, and you represent one of the major European powers at that time, such as Italy, Germany, Great Britain, Russia and the like. You are going to play the military forces of this particular national power. And in each turn, you can move your armies or navies, and you can attempt to take over other regions. But the most important part of this game is in its very name itself, which is Diplomacy. In Diplomacy, in every game turn, there's a phase at which you are allowed to enter into diplomatic negotiations and form diplomatic relationships with other players. You might form alliances against other players such that it is almost impossible to win the game of Diplomacy if you are not talking to other players, forming alliances, breaking alliances, and the like.

In Diplomacy, you as the player would ask yourself, “given this situation, and given the capacities that this nation has to achieve victory in this war game, how would I, as its leader or ambassador act? I want to play out what I would do to survive and achieve victory in this role within this situation.” Thoughtful role-play becomes a way to invest in the success of the game. Role-play in Diplomacy is a skillful means of engaging the game.

Role-play can work at any level of wargames scale, but it seems to draw-out at the more extreme levels of scale: strategic on the one end, with games like Diplomacy, and skirmish at the other end, with what is going to become Dungeons and Dragons. When you're playing a skirmish scale wargame, and where, instead of playing an officer over a squad you are playing only one figure on a wargames table, then you have an opportunity to role play that figure.

Understanding the wargaming roots of Dungeons & Dragons helps to make sense of the kind of confusion about what is going on in play between what is sometimes called "old school" styles of play and more recent Role-playing Games that emphasize the building of a story. What is clear is that role-play meant discerning what you would do in a given wargames situation if you were actually in this war and you actually had the capacities granted you by the game. Role-play meant playing the role of a leader in a war campaign. It did not, at the time, mean something like playing a part in a play or story - although plenty of players loved to ham it up, even from the beginning, if what I have heard is correct.

Next in this short series: Dungeon, exploration, and the title: "Dungeons & Dragons"!

Posted by Tetramorph at 1:57 PM