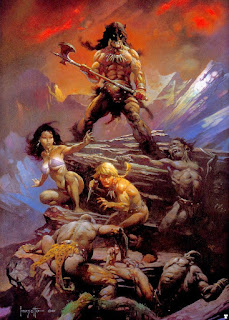 This is my next post in a series of posts that looks at the subtitle of Dungeons & Dragons in order more readily to launch our own hobby campaigning from the original publication.
Last post, I wrote about "Wargames." In this post I will talk about the phrase, "Fantastic Medieval," in the subtitle, or, as we would say it now, "Medieval Fantasy." "Fantastic Medieval" sounds like something medieval that we thing is just awesome: that is fantastic! But that is not what the phrase meant at the time of its publication. For contemporary ears to hear the subtitle, correctly, it should be changed to something like "Rules for Medieval Fantasy Wargames Campaigns."

Wargaming was and is a hobby for folks that dig the study of history. History includes the middle ages and ancient civilizations. So another area of interest that quickly developed for wargamers was medieval and ancient wargaming. It would not be long before wargamers were willing to move beyond the walls of the historical and engage the literature of fantasy.

At the time that Jeff Perren and Gary Gygax published Chainmail as a set of rules for resolving medieval wargames, Gary Gygax had already developed an interest not only in the historical western middle ages, but also medieval fantasy literature. Gygax added a fantasy supplement, to the end of the Chainmail rules for folks that were interested in adding to their wargaming hobby medieval fantasy troops like elves and hobbits, dwarves and gnomes, orcs and goblins, and monsters like giants, dragons and the like.

Gygax added to what was already the base rules of a fairly realistic historical medieval wargame, ways of resolving the possibility of a dragon showing up at one of those battles. He did this for the same reason that historical wargamers would play-out battles that already existed. Just as the historical wargamer would study actual battles from history in order to understand how to set up rules and judge games as a referee so too if you were interested in medieval fantasy literature, you might want to completely redo a battle from one of your favorite pieces of medieval fantasy literature.

The Chainmail Fantasy Supplement list, for example, the Battle of the Five Armies at the conclusion of The Hobbit by J.R.R Tolkien. So Gygax suggests that if you take the Chainmail set of rules and add to it this supplement for medieval fantasy, you can engage an actual fantasy battle as described in the relevant authoritative literature. When you feel like you'd developed enough knowledge of how fantastical battles worked out you might then try your hand at your own hypothetical medieval fantasy war game battles.

Fidelity to the literature

Just as historical wargamers worked to make sure their game was as faithful to what might have happened on an historic battlefield, so too, fidelity to medieval fantasy literature in general and Sword and Sorcery in particular, formed a significant part of this new aspect of the wargaming hobby that Dungeons & Dragons introduced.

But, in the main, the particular style of medieval fantasy literature that influenced Dungeons & Dragons was what Fritz Leiber named "Sword and Sorcery." This is important to know because Dungeons & Dragons is built better to play in this kind of fantasy world than in others. Later editions of games called "Dungeons & Dragons," have shifted from this original base towards more heroic and high fantasy. So sometimes the original game is confusing to folks coming from newer RPGs. Learning about Sword & Sorcery and reading some of its core texts helps in understanding Dungeons & Dragons and helps the amateur hobbyists to build his or her own campaign.

What I've written about so far helps us to understand certain aspects of the game. For example, the taking of sides, or what would come to be called "alignment."

When you are playing a wargame, you need to know the sides of your battle and that's exactly what's going on in the Chainmail fantasy supplement with its “General Line-up.” This gets reiterated in Dungeons & Dragons’ Men and Magic. You have the alignment table to give you sides. The big battle is between law and chaos. Some creatures are on the law side and some creatures are on the chaos side and some can go either way. Then there are some creatures that just opt out of it altogether. They're not on the side of law or chaos, they're just for themselves and these because they don't really want to wage the war between law and chaos are called neutral, like Switzerland and its diplomatic neutrality. So if you're setting up a war game table, one side is chaos and one side is law, in this medieval fantasy war game context.

These categories are derived from medieval fantasy. For example, they are implied in Tolkien's Middle Earth around the War of the Ring. But these terms, "law," and "chaos," are explicit in Sword and Sorcery literature, especially that of Poul Anderson and Michael Moorcock. So, again, we have a fidelity to the literature they were trying to game.

Finally, briefly, we can understand where the use of the term "race," came from. Race was a term already used in medieval fantasy literature to distinguish human characters from other intelligent beings that were not gods or spirits. Especially there would be the fay races, such as elves and dwarves, and the fell races such as orcs, goblins and trolls.

This is not how we use the term "race" in contemporary parlance, so it can throw people off. This is not about supposed differences in human groups. If the fantasy rules were put together today, someone might have chosen "species." Although, even that is misleading in a fantasy context, where a word like "species" would sound to empirical and scientific. So this terminology has stuck and is a part of the shape of medieval fantasy wargame campaigning.

Next in the series: "Rules," free kriegspiel and refereeing.