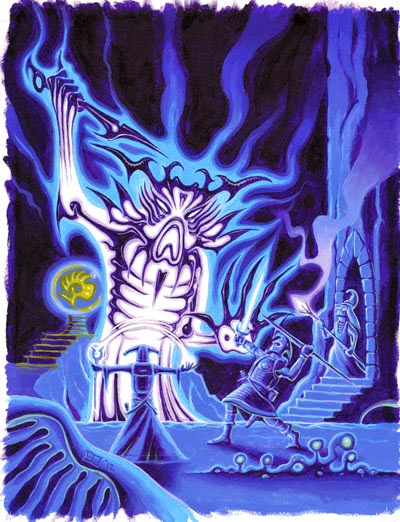 When I first became aware of the OSR, I was excited about it and learned as much as I could. After discovering Dungeons & Dragons (original) and the communities that support it, I no loner feel like I am "a part of" the OSR in a straightforward way.

It seems at first the OSR was about a return to the original, wargame style of play at the time of the birth of D&D as a hobby. Part of this included a return to a more DIY approach, both in terms of setting (not relying upon someone else's published, professional, setting) and "rulings not rules" (realizing that the local referee, group and game play itself was more important for developing both the rules and the shared setting than strict adherence to a professionally developed set of rules and settings).

In other words, the OSR represented to me a return to D&D as a hobby, rather than a consumer product. The hobby approach empowers creativity. The consumer approach makes passive clients. As a hobby it comes with a hobbying community of idea-sharing and mutual support. The internet facilitates such a hobby community in a large and broad way.

Much of what I have seen the OSR become since I got back into gaming in 2013 is a proliferation of small-scale or semi-professional game-resource publication. There is a lot of really good stuff out there. But, just exactly because of my more hobby-based, localist approach, I do not find myself using other people's modules very often, however professionally slick or "old school."

However, much of the stuff published as "OSR" falls into the current cultural zeitgeist that "creative" indicates, or is equivalent to, being edgy, troubled, dark, or "morally ambiguous." A lot of talk out there is about how we need to eschew "tropes" of fantasy in order to be "truly creative." In some cases it seems that the goal is to be as edgy as possible while still playing in a new school, story-game style. "Mapping sucks." "Challenge people with a moral dilemma." Etc. I find none of this attractive.

The following questionnaire comes from a big OSR personality named Zak. I do not follow his work much, honestly. But I stumbled across the questionnaire from other folk's blog posts and google+ posts where they filled it in in interesting ways. That is a good gift to the community, so, thank you, Zak. So if you are still reading, here goes:

1. One article or blog entry that exemplifies the best of the Old School Renaissance for me:

My own pithy zen-like saying in the spirit of Matt Finch's "Primer":


Medieval fantasy wargames campaigning is a hobby, so dive in for amateur fun. Stop expecting "professional production quality," and go for the joy and creativity that comes from a community of amateurs sharing ideas and swapping stories -- hobbyists who do it for the fun of it, not for profit. Don't passively receive wargames campaigning as some product rendered to you as a mere consumer of what "experts" say you are supposed to like or agree upon as standard. Instead, Fight on!

Tomb of the Sea Kings

4. My favorite house rule (by someone else):

"Crits" & "Fumbles": "Natural 20" does full (not double) damage. Don't do fumbles. Fumbles punish everyone with unfun. Both rulings come from Philotomy (see above).

In 2013 I was surfing the web and remembered D&D then I plunged into what was going on and found my way to the OSR and, through them, to the original rules for medieval fantasy wargames campaigns.

Mr. Josh Bear's ODD Referee Tool. I use it every session.

7. Best place to talk to other OSR gamers:

Because of what I mean by "OSR," as a return to old school, war-gaming style of play, together with, but not limited to a DYI attitude:

These are old-school internet formats that actually encourage conversation and not disappearing content:


This is the weapon of a Jedi Knight. Not as clumsy or random as a blaster; an elegant weapon for a more civilized age.

8. Other places I might be found hanging out talking games:

My own blog (you are here). I just don't post very often or very consistently. Sorry about that. (I hope that it is due to the fact that most of my hobby energy goes to actually gaming weekly.)

I also hang out and talk about games with real-live people that I know. Once a year I get to go to the North Texas Role-playing Game Convention and I get to talk to even more real live people about the game.

I followed folks on google+ but just used it to share my blog posts. It is now going the way of the dodo. We will see what happens with the migration to MeWe.

It is not my own, but Delta's Target 20 combat and save resolution, combined with my own house-ruled hit-dice approach for distinguishing classes from one another. This has recently been "historically justified" by none other than Jon Peterson himself!

The OSR stuff that I like, when I like it, is stuff that has come out of someone's loving, amateur DYI hobby that is full of archetypal fantasy, full of interesting puzzles to solve, and immediately usable at the table (= good, easily readable, well-keyed maps).

12. Two other cool OSR things you should know about that I haven’t named yet:

13. If I could read but one other RPG blog but my own it would be:

Please, don't read mine if you are only going to read two RPG blogs! I don't have nearly enough content. So, I get to name two. Since I have already mentioned Delta's D&D Hotspot, Jon Peterson's Playing at the World blog, and Wayne Rossi's Semper Initiativus Unum blog, above, then I get two more:

Dyson Logos' Dodecahedron should get an honorable mention. His mapping skill and artistry is only improving. Unfortunately, for me, the actual gameable content of the maps has become increasingly blah and unusable over time. Dig back into his earlier stuff. Less pretty (perhaps, I still think it is great), but far more usable for old school play: lots of overlapping rooms and corridors, secret hatches, passageways, doors, traps. Just more interesting and inspiring for my style of play.

Finally, Bryce Lynch's Ten Foot Pole should receive another honorable mention. I agree with his module criteria about 80%, and that is about as much as any mature adult can expect to agree with another mature adult if they are not members of a cult. My main points of disagreement are where he tends towards "realism" and "ecology," whereas I enjoy a more "funhouse" approach.

My own cumulative setting and house rules. I mean not just The Perilous Realms supplement I published or the simplified version I have as a page on my blog, but all of the cumulative rulings I've tracked due to actual play in the campaign. I have it all compiled in a readable but loving imitation of the Judge's Guild Ready Ref Sheets. I call it "Campaign Aids and Inspirations." It is where I put all my generative charts, tables, and decision trees. I haven't shared that document and I may never. The point is for you to develop your own settings and rulings.

The Perilous Realms, a medieval fantasy wargames campaign. I use my own campaign world based upon an anachronistic mash up of our own medieval and ancient past. Each particular wilderness is the Outdoor Survival board set in such a way that the river flows to the nearest major body of water. The particular wilderness right now I call the Hollow Lands. They lie underneath the Mazandarin Sea, the nearest major city being Hecatompylos along the Silk Route. I use my own house rules built upon Dungeons & Dragons (the original rules for fantastic medieval wargames campaigns).

16. I don't care whether you use ascending or descending AC because:

17. The OSRest picture I could post on short notice: