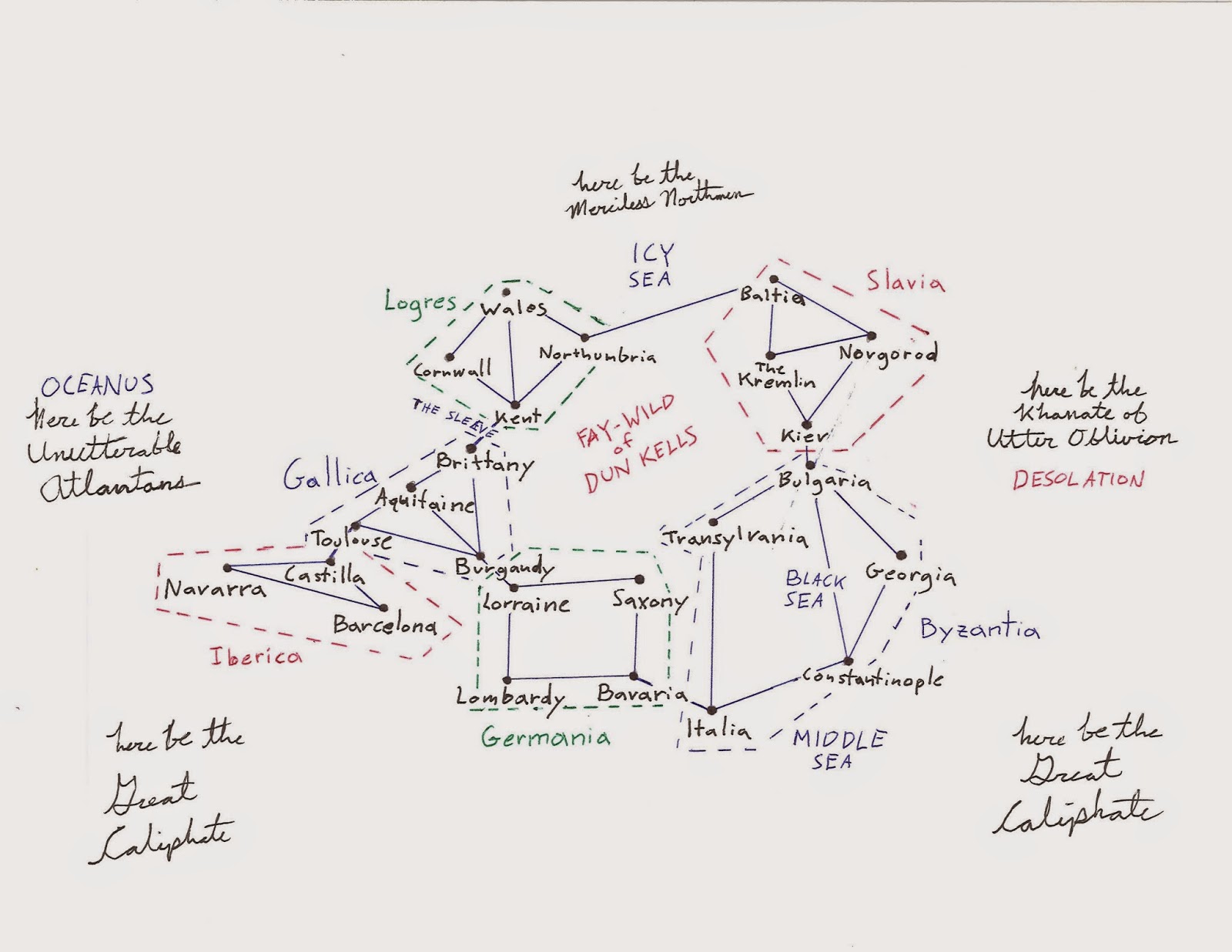 I am getting ready to run a play-by-post game over at "ThePerilousDreamer's" new forum that discusses Campaigns and House Rules for OD&D.

I am psyched. It will be at the highest level, "campaign level warfare." The players will act in the persons of the characters who will be the monarchs of each major kingdom: Byzantia, Germania, Iberica, Gallica, Logres and Slavia. I will be working on rolling up around level 10 characters for each of those roles and sharing them with the players soon. Above is my "map" for this game. I designed it in a more abstract, "London Underground Map" style to make connections clear and because I am no artist. I think it is usable.

The main game mechanic will be that of Risk combined with a kind of Diplomacy-style of play. Players will publicly announce publicity and "spin" from their monarchs on the public boards. They will negotiate treaties and trades by PMs (that include me as ref). They will issue orders for each of the main phases of play to me, simultaneously, by PM.

So, the main play phases will be:
1. Negotiate and trade
2. Reinforce
3. Attack
4. Fortify

They will only know what their armies immediately hold and immediately neighbor. They will have to trust what their fellow players tell them or send out spies for any other knowledge. I will keep campaign level accounts vague for that reason.

For reinforements, they will get one army for every two realms they control, rounded down, never less than two. They will get "kingdom" bonuses when they control every realm in a given kingdom: 2 for Iberica, 4 for Byzantia, 3 for the rest. I will call "territory cards," "trophies." The trophies for victories will be three different resources: wisdom, power and wealth. They can turn these in for 1 more army the first time, and these will increase by one each time resources are turned in. They may trade these during the negotiation phase.

I still have to work out how attacks will need to be worded, as they will be resolved, simultaneous, by me as referee. I still need to work out fortification, but I will allow formal allies to fortify one another.

I am getting excited about this!
Posted by Tetramorph at 2:46 PM 2 comments:

a game where anything can be attempted

My title to this post refers, or course, to Jon Peterson's definition of a role-playing game.

In my Dun Kells house rules, I try to make this quite explicit.

Any character can engage in combat. Knights are just the best for melee, scouts for range. Knights and dwarves get the best armor class possibilities.

Any character can attempt to cast an arcane spell. Magi are just best at it. It is safest for them. Other characters ability check intelligence for success and save against insanity. Clerics loose the favor of their patrons until they confess and do penance.

Any character can attempt to call down a patronal boon. Okay, well, almost any. Fay characters, dwarves and elves, cannot. They are not baptized so they have no heavenly patrons. Clerics do this best and it is the safest for them. Others characters ability check wisdom for success and save against "blight."

Any character may explore and attempt to use those skills associated with the "thief." Dexterity modifiers apply in most cases. "Scouts" (my lawful "thieves") get an additional bonus every three levels, starting at level four.

That seems to me to cover just about all of the kinds of actions that get parceled out as class specific. In the main they are no longer class specific. Class just makes you better, safer, or both. Players who choose a class still get to feel that they have a special role in the party and that their role progresses. But, in the main, characters can "attempt anything."
Posted by Tetramorph at 1:35 PM No comments:

Announcing a new discussion board focused on Campaigns and House Rules. The primary purpose of these forums is to discuss fantastical medieval wargames campaigns and house rules in all threads, unless otherwise noted. The primary focus is on OD&D, other Classic D&D rules and their various simulacra as the assumed foundational rule-sets for our campaigns, as well as, the house rules used therein. This will be a place to vet house rules and discuss them before they are tried out on the unsuspecting players. We will post new monsters and all types of new material for our campaigns; including, but not limited to, setting ideas, setting/world building and the like. Tips on how to run a campaign, how to ref/DM and other related topics are also welcome.This new forum is not an attempt to replace any existing forum, but rather to complement and spur more creativity. The focus is more on using and adapting the rules to your personal campaign. We hope it will be a great deal of fun to look at other people's campaigns and see how they do things. Even on those rare occasions when there is nothing that you directly want to borrow, we hope the discussion will always prove inspiring.If this is of interest to you, please join us in this joint creative effort to harness the synergy of sharing ideas and mixing them to get more old school goodness out of many minds than what one mind working alone could accomplish alone.You can find us at: Campaigns and House Rules Discussion for OD&D.
Posted by Tetramorph at 1:12 PM No comments:

One of the things that some folks complain about in 0e is that "ability scores don't mean anything." Some say this to the degree that they simply drop them.

In Dun Kells, I have decided that a 3d6 check against ability is something I want to do, but not all the time. For normal exploration and combat I want role-play and rulings to determine the outcome. But sometimes players want their characters to attempt something pretty crazy, gonzo, or, well, just difficult. I want ability checks, as a referee, so that the dice can play the "oracle" for me that I can interpret. I don't want it to turn into "New School" style "feats" and "skills." I just want some probability to be added to the mix so that I, as ref, have something else to help me to interpret what is going on and the likelihood that characters are successful, and the degree to which they are successful.

I also decided, contrary to what A LOT of fellow Old School folks like, to use the B/X modifier table:

I realize this makes my game a bit more "crunchy" than many Old Schoolers like. I am willing to take that. I just want the ability scores to "mean something"! And I don't think it is too much crunch, just a little arithmetic. Players might choose simply to factor it into their "to hit" schedule directly rather than adding it per roll. There are ways for them to get used to it. And I believe they can and will get used to it.

Finally, I think it adds to the "flavor," or "feel" of a character, making role-play more fun - both for me and the players. And not just in the "bonus" category. Imagine someone who, astronomically, rolls a 3 for strength, but is determined to play a "knight" (the "fighting man" of my campaign). Well, now that is going to grant some very interesting situations that the player is going to have to role-play!
Posted by Tetramorph at 2:20 PM No comments: