This is the third in a series of web log posts where I describe what “alignment” must mean in the Perilous Realms, based upon our group’s tone and play-style, and its cumulative rulings so far. 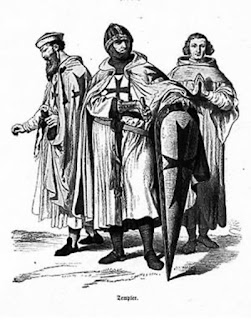 Lawful Clerics are members of the Church of Law who have made vows and joined some order of religious (which is to say, monastic) knights. Regular, everyday priests and prelates are not “Clerics,” in this sense. Should a Lawful Cleric willingly break any of the Laws of Noe his or her clerical powers would be removed until repentance and restitution are made. That said, those who become knights of religious orders (the so-called “Clerics” of the game) have additional rules they must follow as a part of the vows that set them apart and grant them their authority to call on miraculous powers. Willingly breaking these vows also result in the removal of their special authority until repentance and restitution is made. These are the Seven Vows of the Crusade of the Orders of Religious Knights (Clerics):

The Vows of Crusade

1. Worship the Most High alone

3. No shedding of blood

The first vow, monotheism, sets Clerics apart from their coreligionists. Other Lawful men may “worship” many gods, angels, and saints, including the offering of sacrifices and oblations, so long as these Powers are recognized members of the Council of the Most High and the rituals themselves do not involve the worship of idols. Clerics, on the other hand, may only engage in the ritual worship of the Most High, alone. That said, Clerical powers are mediated by saints and angels whom the Cleric adopts as a patron. But the Cleric does not worship such patrons.

The second vow commits the Cleric to certain religious and ascetical disciplines. These include a day of rest every week – Saturn’s Day, or the Day of Kronos. Kronos is closely associated with the Most High. (But there is debate as to whether or not Kronos is the Most High!) Weekly rest and daily prayers are necessary for the restoration of miraculous authority, Clerical “spells.” If a Cleric does not rest to pray once a day, and rest entirely once a week, Clerical spells are temporarily unavailable. In cases of evasion in the wilderness, this may prove dangerous to a party.

The third vow, no shedding of blood, is where we get the Clerical prohibition on the use of sharps as weapons. The blood is the life of the animal and belongs to the Most High. This means that Clerics are “vegetarians,” in the sense that they do not eat the flesh of mammals. Other animals and milk are not off limits. But won’t, you might ask, a mace “shed blood”? Well, yes. But here is where a little beautiful casuistry enters (and how could a game be “medieval,” without a little casuistry?). The shedding of blood by means of blunts is not necessary and is often a deleterious but unintended consequence of their use. But by fighting with sharps the means of subduing or killing an opponent depends upon cutting, and therefore the shedding of blood is inherent to their use. So: “no sharps,” but not “no killing,” see the commentary on the Fourth Law.

The fourth vow, honor, is directly related to obedience, something inherent to any form of monasticism or membership in a religious order. But it also includes the encouragement of subordinates and things such as respect for the dead by putting them to rest, etc. Clerics rarely tolerate the abuse of a corpse and must never participate. The Clerical war against the Undead is not that of corpse mutilation, but all attempts must be made to free the corpse from this unholy abuse and restore the body to rest through proper committal to the elements. This includes burial, proper, in the earth, but also burial at sea and cremation on pyres. When Clerics gain the authority to dispel the curse of Undeath, this does not cause the undead victim to disappear or disintegrate. It rather immediately restores the corpse to a state of rest, laid and in a position ready for committal to the elements.

The fifth vow, that of mercy, means that all Clerics are expected to do whatever they can to defend and, if necessary, provide for widows, orphans, pilgrims, the oppressed, etc. They are expected always to grant subdued foes the chance to convert to Law, repent and be saved. Fell races and Chaotic monsters are incapable of conversion and repentance, so mercy does not extend to them.

The sixth vow, the prohibition of falsehood, means more than simply not lying. It also demands that a cleric use no disguise, nor engage in any “sting operations” or subterfuge. Nevertheless, a Cleric may tolerate other party members who do so, they simply may not directly participate. If directly questioned in such situations, Clerics may, however, tell the truth in a “creative” way.

The seventh vow, the rejection of vanity, means avoiding the pomp of the world. As a virtue, this includes not coveting the wealth, title, or power of others. As a practice, it includes the requirement to tithe any wealth obtained through adventuring. This corresponds to the traditional monastic vow of “poverty.” It also includes the monastic vow of “chastity.” Remember, this is a medieval fantasy, so marriage in the medieval world was often a means of glory, the making of alliances, and the maintenance of worldly society. Think “trophy wife,” and you will get the picture. Although marriage is lawful and to be esteemed for those not involved in the religious life, for a Cleric, all spouses would be merely worldly “trophies,” for those who have answered the high call of Crusade.

Next: Alignment and Evil Clerics

Posted by Tetramorph at 7:26 AM