Chaos in the Perilous Realms

This is the second in a series of web log posts where I describe what “alignment” must mean in the Perilous Realms, based upon our group’s tone and play-style, and its cumulative rulings so far. The first was on the Law of the Perilous Realms. 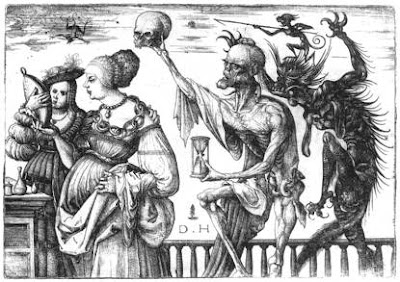 Chaos in the Perilous Realms

Okay, so a character is on the side of CHAOS. But what does that mean?

It means you defend moral sentiment and basic instincts as all that is necessary to guide behavior. It means you believe that human culture, customs, and traditions often subvert basic human sentiment and instinct and should thus be shunned and overturned.

The above sounds rather noble. And the highest philosophers of Chaos indeed hold the above in very high esteem and may wax rhapsodic about it from time to time. But mainly folks who choose Chaos just choose it because they don’t want to obey law, or perhaps just anyone at all, so Chaos suites them just fine, whatever its philosophers may or may not say. What are the basic sentiments?

The Seven Sentiments of Chaos

Honor may well be honorable, but it can also turn into a shame-based culture and an almost gang-like vibe of constantly worrying about and accusing others that they have “dissed” them. Think gangsters or the 47 Ronan story.

Loyalty can be honorable, but it can also turn to cruelty when the demands of the superior are not fair to the inferior, but the threat of accusations of disloyalty forces obedience.

NOTE: the combination of honor and loyalty means that, in the main, Chaotic parties, and even Chaotic members of a mixed party, may, generally, be expected to be helpful rather than harmful to the party. In other words, having your character behave poorly towards other members of the party because the player claims to be playing “in character,” as someone on the side of Chaos simply will not fly. So, no Trolls, no Griefers, no doing it “Just for the Evulz.” In the main, this includes even non-player characters, at least towards their own companions.

Reciprocity means fairness and justice, but it can just as well turn into a zero-sum game of retribution. Seeking one’s self-interest can always be justified as demanding justice in the form of mere retribution in the style of a moral “tit for tat.”

So, obsessive concern for the above can turn to their opposite. A sensitivity to dishonor and betrayal, together with a strong commitment to the demands of reciprocity (render as rendered) may lead to retribution and vengeance. This is especially intense as Chaos shuns courts of law as a merely human custom that gets in the way between two parties having the “freedom,” to “resolve” the dispute on their “own terms.” So, duels, feuds, assassination, and lynching are de rigueur for Chaos.

Affection can be a beautiful thing, like a mother’s love of a child or two fast friends. It can also be the affection a master has towards his slave, or, in turn, the “Stockholm Syndrome” generated in the hearts of the kidnapped towards their captives.

Purity is an honorable sentiment, leading to the shunning of things that might degrade human dignity. It can also lead to self-righteousness, a sense of superiority, sexism, racism, bigotry –looking at another member of a free race – or even a free race as a whole – as if they were less-then. Cruelty can always be justified as simply following the human sentiment of “moral disgust” towards the “inferior,” or “vermin.”

Pity can lead to mercy, kindness and even defense of the helpless. Pity can also be condescending and humiliating. Pity is not necessarily compassion or empathy. Conan often shows pity and provides kindness and defense. He would not even know what “compassion” means, and “empathy,” would simply be meaningless to him.

Liberty cannot stand that free races should suffer any compulsion, but it can also just be a freewheeling, “don’t fence me in,” “get of my lawn,” attitude that justifies flouting any law that seems inconvenient in the moment. Liberty is often cited by the chaotic as the very reason why universal Law must be rejected. Universal Law is seen by the chaotic as a trick by which the “weak,” have figured out a way to limit the power of the strong and worthy (think Nietzsche here). (Lawful, on the other hand, sees the Law as the means to freedom. Lawlessness is dangerous and oppressive, not only to the weak but the strong as well. Law guides creativity and reasonable action, and thus true freedom.)

A note about the relationship of Chaos to being a “good” character:

You can certainly have a fundamentally “good” Chaotic character. But there are simply more evil Chaotic characters because evil folks will almost always choose Chaos as it can easily be manipulated to justify their lawless behavior.

Up next: Lawful Clerics and Alignment.

Posted by Tetramorph at 2:09 PM